There are huge changes in the solving algorithm. It now solves 9×9 Sudoku (or finds out that it is unsolvable) in less than 15ms. It also solves 99% of Sudoku 16×16 with 40 random numbers in less than 1 second. The remaining 1% is solved in over 5 minutes, but I have also found such a Sudoku that my algorithm was unable to solve in 30 minutes. If you like challenges and would like to show me that your skills are much better than my programming skills, feel free to solve it – you will find it below. Solving algorithm also now has a 2 second timeout, so the program will no longer freeze, but will display a message “too complex puzzle”. I am going to implement over the weekend a Sudoku generator that generates puzzles with one unique solution. But for now, here is a jar file and here is the code.

Challenge for you:
This is the puzzle my algorithm was unable to solve in over 30 minutes. Show that you are better! 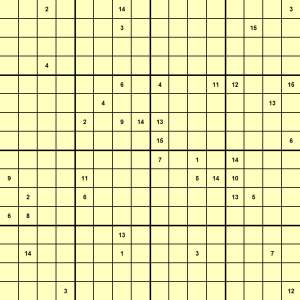 How do solving algorithms work:

The grid consists of N*N x N*N cells (e.g. in Sudoku 9×9 N = 3 and there are 81 cells). The zone is a row, a column or a square, it contains N*N cells. The square is a NxN large part of the grid (in 9×9 there are 9 squares of size 3×3). The neighbours are all those cells that share the zone with the cell. Also each cell contains a filled number and the set of possibilities (candidates).

I have done MSci in Computer Science at King’s College London and currently work as Software Engineer specialising in Java. I spend most of my time in front of computer improving my programming (and other) skills or just relaxing with a good game. I also train some sports but at the moment I am not a member of any club. I love cycling and volleyball, but I have also played a lot of football, tennis and trained martial arts.
View all posts by Jaroslaw Pawlak »

Posted on March 16, 2012, in My Projects and tagged gaming, Sudoku. Bookmark the permalink. Leave a comment.